The guys will especially be able to relate to this question. Have you ever felt jealousy over someone? Perhaps they were a friend or just a random girl you saw around. But when another guy starting dating her, or flirting with her, or even casually talking to her, you became really envious.

How do I know this? Because I’ve been there, fellas. It’s not a spot one wants to be in. Proverbs 6:34 tells us, “For jealousy is the rage of a man: therefore he will not spare in the day of vengeance.” This sort of jealousy over someone who you do not possess (as in, married couples possess each other) is sinful. But I’m not here to talk about that. I’m using this as an example to see God’s somewhat overlooked attribute. 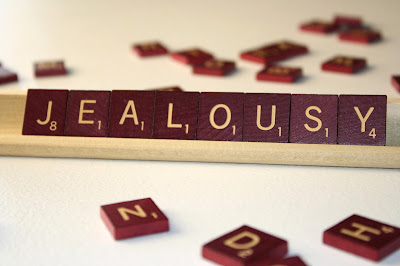 Years ago, I remember walking in the rain, trying not to think about someone, when this thought process took shape in my mind. Just as we get jealous over that certain girl, so God is jealous over us. But unlike in our case, God is righteous in his jealousy.
Since the Bible likens us as married to Christ, we can see why the example is proper. If another man starts to flirt with a man’s bride, he will not idly stand by. He would be a coward to do so.
As the bride of Christ, when something else comes along and begins to court us, God jumps into defense mode.
But throw another kink in the analogy. Let’s say the bride willingly has an affair. We would say that the husband’s love can rightly be removed. But as we see in the book of Hosea, as well as all throughout the Bible, when we “play the harlot” and run away from God, His love is not quenched. The clearest example of unconditional love runs after us and retrieves us from the situation.
Here’s the simple-in-words-difficult-to-practice part: We don’t have to run. In fact, when we run, we risk our safety because we have left the protection of the Husband. Staying close to Jesus, linked together, offers us protection from the wicked one who wants to take us from Him.
There may be those who come along and try to take the wife even by force. A good husband will do whatever he must to protect her.
Satan’s goal for the Christian is to remove him as far away as possible from the Husband. (Yes, guys, it takes a while to get used to the fact that we are Christ’s bride.) Being away from Him means having to face Satan on our own, a battle we cannot win. But God is not willing for us to face defeat in Satan’s hands. It is not our battle to fight, but His—one He will never lose.
“He is jealous for me…”
To get a good idea of God’s jealousy, and consequently His defense of us, let’s look in a couple Old Testament books.
The name of the Lord is a strong tower: the righteous runneth into it, and is safe. –Proverbs 18:10

The very name of God is a fortress which will, as we are promised in God’s Word, keep us safe. This isn’t an abstract notion; this is a promise from God.
God is not a man, that he should lie; neither the son of man, that he should repent: hath he said, and shall he not do it? or hath he spoken, and shall he not make it good? –Numbers 23:19
We’re not just talking about God grabbing us and running away. His vengeance and wrath are tied up in this. He will not let what tries to do us harm go unpunished. Psalm 18 gives us vivid imagery of what this looks like:
To the chief Musician, A Psalm of David, the servant of the Lord, who spake unto the Lord the words of this song in the day that the Lord delivered him from the hand of all his enemies, and from the hand of Saul: And he said, I will love thee, O Lord, my strength. The Lord is my rock, and my fortress, and my deliverer; my God, my strength, in whom I will trust; my buckler, and the horn of my salvation, and my high tower. I will call upon the Lord, who is worthy to be praised: so shall I be saved from mine enemies. The sorrows of death compassed me, and the floods of ungodly men made me afraid. The sorrows of hell compassed me about: the snares of death prevented me. In my distress I called upon the Lord, and cried unto my God: he heard my voice out of his temple, and my cry came before him, even into his ears. Then the earth shook and trembled; the foundations also of the hills moved and were shaken, because he was wroth. There went up a smoke out of his nostrils, and fire out of his mouth devoured: coals were kindled by it. He bowed the heavens also, and came down: and darkness was under his feet. And he rode upon a cherub, and did fly: yea, he did fly upon the wings of the wind. He made darkness his secret place; his pavilion round about him were dark waters and thick clouds of the skies. At the brightness that was before him his thick clouds passed, hail stones and coals of fire. The Lord also thundered in the heavens, and the Highest gave his voice; hail stones and coals of fire. Yea, he sent out his arrows, and scattered them; and he shot out lightnings, and discomfited them. Then the channels of waters were seen, and the foundations of the world were discovered at thy rebuke, O Lord, at the blast of the breath of thy nostrils. He sent from above, he took me, he drew me out of many waters. He delivered me from my strong enemy, and from them which hated me: for they were too strong for me. They prevented me in the day of my calamity: but the Lord was my stay. –Psalm 18:1-18
And you, being dead in your sins and the uncircumcision of your flesh, hath he quickened together with him, having forgiven you all trespasses; Blotting out the handwriting of ordinances that was against us, which was contrary to us, and took it out of the way, nailing it to his cross; And having spoiled principalities and powers, he made a shew of them openly, triumphing over them in it. –Colossians 2:13-15

Just as God initially took everything from the evil powers of this world, tarred and feathered them, and drug them through the streets (essentially), so does He come with like indignation every time we are in trouble.
By simply calling on Him, He will unleash His wrath on ungodliness for our sakes. God is too jealous of us, too unconditionally loving, to do anything else.
Many are the afflictions of the righteous: but the Lord delivereth him out of them all. –Psalm 34:19
You have a God who is protective of you. When Satan tempts with sin, takes your arm and says to follow Him, God banishes him with the victory Christ already attained on the cross. That is the promise given to you.
Posted by Joe Trammell at Thursday, April 12, 2018 No comments: