The Shutdown, The Wall, and Illegal Immigration

While it may be denied, it is not difficult to see that we have a problem with illegal immigration. I guess that says something positive about our nation that so many people want to get in. But every crime committed by an illegal immigrant—especially the more heinous and violent ones—is a stain on our federal government, demonstrating its failure to protect its own citizens. Not that it’s ever had a problem with failure before.

So I am in agreement that something needs to be done to curb and stop illegal immigration. Let me explain the reasoning behind that. 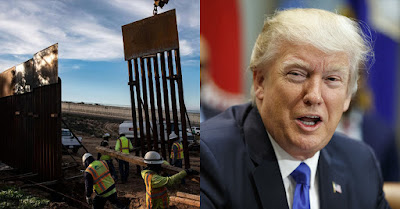 I am sure there are people out there who want to prevent illegal immigration because they have a bias against Mexican people and other Latin Americans. But I don’t think that’s the majority view by any means. The process to legal immigration, which we could argue is convoluted and could be more streamlined, is designed to weed out violent criminals. By documenting who comes to the U.S., we are able to deny people who will be a risk to U.S. citizens. That’s what any country would do. It is not bigoted, it is sensible.

There is a demonization by some liberals of people who hold this view. They will equate wanting to prevent violent criminals from entering the country with hate and racism.

I don’t care who it is. If the person is Canadian, European, or Latin American, if he’s a violent criminal he shouldn’t enter the country. I know most immigrants—and most illegal immigrants—are fine and not a danger. But we can’t know that unless we document them and subject them to a background check (that many of us have to go through for work, purchasing firearms, etc.). The “Build Bridges, no Walls” or whatever catchphrase peopleuse is naïve. It would be criminally reckless to just let anyone in, and underneath the half-baked opinions I think people know that.

But apart from violent criminals, we should welcome immigrants. I’ve had some good friends who are immigrants. It is not a bias towards other ethnicities, but a basic desire to weed out people who would be a threat to our citizens. If you want to demonize that, you need to find a better argument, if you even care enough to do so.

With that being said, we turn to the issue at hand. We’re in our second month of a government shutdown. Personally, if federal employees weren’t being hurt by it, I wouldn’t mind a partial shutdown. Half the federal government could be shut down permanently and it would probably improve our lives. But, unfortunately, caught in the middle of the political stalemate are a whole lot of people being screwed over. The Coast Guard, TSA agents, air traffic controllers, and other “essential” people are being forced to work without pay. Other employees are out of work altogether.

It’s ridiculous. I don’t know why there isn’t a provision anyway to at least pay these people, even if other areas are underfunded or not funded. A lot of people are struggling as the President and Congress stare at each other across no-man’s land. Their stubbornness isn’t affecting them, so they don’t care.

What is this about, anyway? President Trump, who I didnot trust in 2016 and don’t trust now (although unlike the irrational masses, I don’t think every thing he’s done is terrible just because he’s mean), told us that we were going to build a wall and Mexico would pay for it. That made plenty of sense, with sovereignty and all. Then it was going to be reimbursed by Mexico. Now we need to appropriate funds or the shutdown continues.

While I agree with the President that illegal immigration is a problem, I don’t think his solution will actually solve it. A wall might decrease the numbers, crossing the border openly is only one way of getting in. From accounts I’ve heard, the most common way of illegally immigrating is through overstaying visas. That doesn’t get solved with a wall. I can’t imagine tunneling comprises a huge percentage, but that also can’t be stopped by a wall unless it is dug deep, raising costs even further. There is also smuggling across checkpoints, which apart from the smuggling is a legal means of entering the country.

The same is true of drugs. Smuggling and tunneling are common ways of getting them across. We could also go into the excessive costs, which would be significantly more than the $5 billion espoused by the President, the environmental impact, and taking private citizens’ land (though it might be justifiable if a wall would help things).

The wall seems much more to me as a lasting monument to President Trump. He wants a symbol to point to, a literal mark on our country. An ego like his needs fueling.

I imagine everyone found something they liked and didn’t like in these thoughts. My point is that liberals are naïve or just don’t care when it comes to the safety of U.S. citizens from criminals that we can’t document. Maybe it’s a bleeding heart, maybe it’s to help voter fraud, or maybe it’s just contrarian. Meanwhile, many conservatives believe a wall will help the problem, when I fear it will not. And while we argue over the merits of the Great Wall of Donald, we continue to trample on the federal employees still waiting for their paychecks.
Posted by Joe Trammell at Friday, January 25, 2019 No comments: