Jesus: Born with Death in Mind

Another Christmas has come and gone, in which we, theoretically, remembered the birth of Jesus Christ. It’s easy to miss that message of Christmas entirely, but even for those that recognize it, its significance is often missed.

It’s almost like a children’s story. Here’s the “little Lord Jesus,” as one song puts it, being born in a manger surrounded by cattle. Mary and Joseph are a nice couple, and shepherds come and then wisemen come, although they weren’t actually there that night. It’s cute. 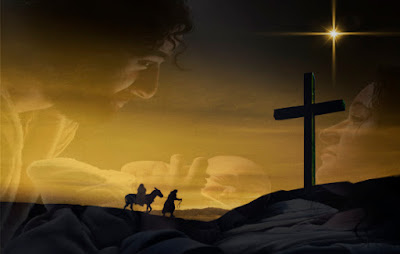 The very first prophecy in the Bible looked not at Jesus’s birth, but what would be accomplished through His death and resurrection:

And I will put enmity between thee [Satan] and the woman, and between thy seed and her seed; it shall bruise thy head, and thou shalt bruise his heel. –Genesis 3:15

God spoke of the offspring of Eve—Jesus—crushing Satan’s head, while Satan would crush Jesus’s heel through the crucifixion.

As prophecies continued to be sent over time, both the birth and the death of the Messiah were spoken of many times. Isaiah spoke of His birth:

Therefore the Lord himself shall give you a sign; Behold, a virgin shall conceive, and bear a son, and shall call his name Immanuel. –Isaiah 7:14

And later spoke of His death:

He was taken from prison and from judgment: and who shall declare his generation? for he was cut off out of the land of the living: for the transgression of my people was he stricken. –Isaiah 53:8

Over time, the One labeled the Messiah was prophesied to be born in Bethlehem (Micah 5), be an heir of David (II Samuel 7), have a messenger to prepare His way (Isaiah 40), be betrayed (Psalm 41), be crucified (Psalm 22, which has a number of specific crucifixion prophecies), be buried with the rich (Isaiah 53), and rise again (Psalm 16). 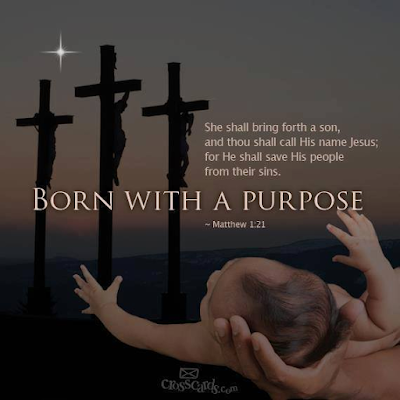 It would be right to ask if this all spoke of the same person. The Jews’ reaction to Jesus show that all of these prophecies were speaking of a single person—the Messiah, or “anointed one”:

The woman saith unto him, I know that Messiah cometh, which is called Christ: when he is come, he will tell us all things. –John 4:25

He first findeth his own brother Simon, and saith unto him, We have found the Messiah, which is, being interpreted, the Christ. –John 1:41

Others said, This is the Christ. But some said, Shall Christ come out of Galilee? –John 7:41

And when he had gathered all the chief priests and scribes of the people together, he demanded of them where Christ should be born. –Matthew 2:4

At Jesus’s birth, it was prophesied multiple times that He should die.

When the shepherds were told of Jesus’s birth, they were told that “unto you is born this day in the city of David a Saviour, which is Christ the Lord” (Luke 2:11). He would save the world by dying for it.

A man named Simeon was told by God that he would see the Messiah before he died. He said this when he saw Jesus:

Lord, now lettest thou thy servant depart in peace, according to thy word: For mine eyes have seen thy salvation, Which thou hast prepared before the face of all people…” –Luke 2:29-31

Simeon also realized that Christ would be killed, telling Mary that “a sword shall pierce through thy own soul also” (Luke 2:35). 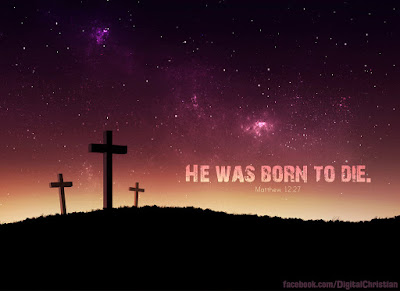 Since Mary had the same knowledge as any Jew about the Messiah, yes, Mary did know that Jesus would “one day rule the nations” and “save our sons and daughters.”

And, as the rest of the Gospels say, Jesus did go on to be crucified for the sins of the world, be buried, and rise again.

The end must always be seen in the beginning. Centuries before Jesus came in the flesh, prophets said that He would not only be born, but that He would die. When Jesus was born, there were predictions of His death. Jesus’s primary reason for coming in the flesh to Earth was not to teach us things or heal people. He came to Earth to die a substitutionary death for the world. When we remember His birth, we must remember the reason why He came.
Posted by Joe Trammell at Tuesday, December 26, 2017 No comments:

The Problems with Free Condoms at Universities

A few years ago, I was able to meet with the director of NKU Health Services to talk about the university’s policy regarding birth control and abortion.

I am not entirely against certain contraceptives. But morally, I see a very limited use. Never, ever, should contraceptives that serve as abortifacients (slickening the lining of the uterus so a newly formed human life cannot continue forming, thus taking his or her life) have ever been created, much less used. There are likely many more humans killed by abortifacient birth control than those killed in abortion mills.

I am also morally against sex before marriage. So the only circumstances I find contraceptives to be used appropriately is inside of a monogamous, heterosexual marriage, and only if this will not take the life of a very young human. I am open to arguments against its use here as well, but I haven’t heard a compelling one yet.

With that background, I found NKU’s policies among the fairer ones at a public university. They hand out condoms, and in doing so remind students that there are still risks to having sex with contraception and that the only way to avoid this is through abstinence. 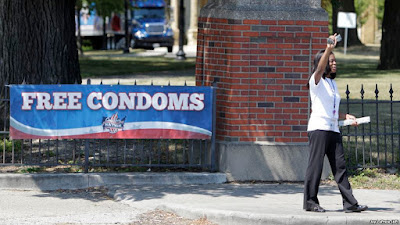 There is clearly not a unified message, as is evident from the “Stay Safe. Use a Condom.” sign that graced the women’s studies hall. I guess having an 18% chance of being exposed to a possible STD or becoming pregnant is what passes as “safe” these days.


On the side of abortion, the health center only refers if specifically asked. Dr. Anderson, the director, told me they do the same for resource centers as well. He is also a former pastor who now sees the “complexity of the abortion issue”, so I might double-check his word.

All things considered, though, the policy isn’t too bad, if indeed I was being told the truth. Yet I still take issue with the free contraceptives.

This is one majorly hypocritical expectation of liberals. They want the government to stay out of their bedroom, but want taxpayer funds to kill their child in case their contraception doesn’t work. They don’t want Christians to “legislate morality” but force us to foot the bill for their sexual promiscuity.

I don’t care what you do in your bedroom. I don’t hold you to the standards I hold myself to. Yet somehow, it’s okay to force me to fund lifestyles I believe are wrong.

My housing fees went towards a sign in the Norse Hall director’s window telling students to ask if they need a condom. Surely that conversation must be awkward.

“Hey, let me stop by my hall director’s office so I can get some condoms for us later.”

I find it utterly repulsive that such an option exists. 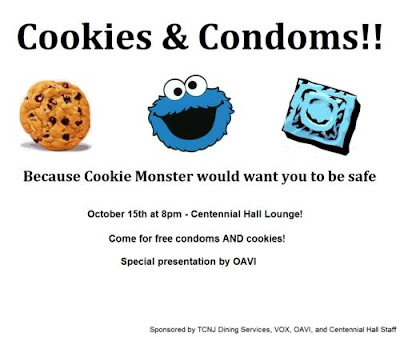 The foolish reality of it all is that public universities are encouraging sex. You cannot hand out free contraceptives and simultaneously encourage someone to not put himself at risk by having sex.

That would be like going to hold a friend’s hand during an abortion procedure. If I really care about her, I’m going to try to stop her, not enable her. No true pro-life person would help someone have an abortion. No one actually worried about student health will enable them to do something that puts their health at risk when there is a legitimate alternative.

Naturally, we couldn’t have a conversation about contraceptives on college campuses without that little wink from a middle-age person.

“Oh, you and I both know that they’re going to do it anyway.”

Apparently, we just can’t help ourselves.

For the love of God, have a little faith in us.

The fact is, I know people that have never engaged in sexual activity. I know unmarried adults that have never had sex. Have we considered the self-fulfilling prophecy we are spouting from our positions of higher learning?

“You all are going to have sex. That’s just the reality of it.”

We don’t need a whole lot of encouragement, and an asinine statement such as that is all it will take.

College health clinics will rave about getting ample sleep and wearing sunscreen, but encourage sexual activity by paying for the night. Imagine them telling us to wear sunscreen and do whatever we want in the sun, and it will be “safe”. Why a clear warning for one but not the other? 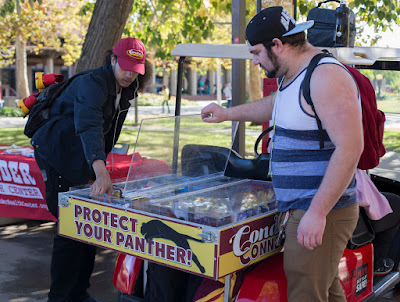 The first line of the abortion cartel is the sex education of public high schools and universities.

Here’s a simple policy. Let’s be entirely honest with students. Let’s give them the facts on the risks involved with contraception. Let’s tell them that condoms don’t protect against the most common venereal disease, HPV. Give them unbiased information. Then tell them that there is only one solution to side-step those risks: abstinence. It’s the difference between running through a minefield or following the path around it.

Then leave the choice up to them. If they want to be sexually active, the consequences are solely on them. Don’t encourage them by providing them free condoms.

I don’t feel it is too much to ask for someone to provide his own contraceptives if he wants to have sex. There is a Kroger near campus and plenty of other places that sell them. There are prescriptions. But to use the money of students who are morally against sex before marriage is unfair. Even if I weren’t against it, I still don’t see the need for why I should pay for someone else to have a condom during sex.

I would stay out of your bedroom if you would let me out.
Posted by Joe Trammell at Thursday, December 07, 2017 No comments: