The Nativity in Context: The Before and After

It’s 430 bc. The prophet Malachi has finished his series of prophecies. Israel had went through cycles of rebellion—in the wilderness after leaving Egypt, during the period of the judges when “every man did that which was right in his own eyes,” and during the monarchies that led to a split into two kingdoms, ultimately culminating in the exiles into Assyria and Babylon. God had promised that a remnant would return to Israel, and they did. Now, that remnant was also rebelling, and God, through Malachi, calls them on it and tells them to return to the Lord. 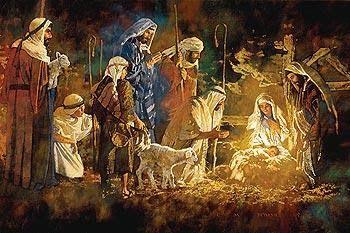 For over 400 years, there are no prophets. God does not speak to His people. There was never a period before like it. A lot happens in this time, as kingdoms rise and fall as Daniel predicted. But one thing that does not happen is a word from God meant for all to hear. Years turn to decades, and decades to centuries. Traditions continued, but nothing new.

While the silence continued, a nation waited for something promised in the future, as more people likely forgot or doubted it would ever occur. God had told the ancestors of a coming King that a King would come from Judah and be the rightful heir to David’s throne. The prophet Isaiah said He would be God among us, born from a virgin. The prophet Micah said He would be born in a small town outside of Jerusalem called Bethlehem. These words hung over all humanity as the years went by.

Could we understand the weight of this silence felt by the world who might have thought God had finally given up on them? We cannot, because that silence was forever shattered by what came next.

The unraveling of this plan had really begun all the way back after the fall of man, when a Conqueror was promised who would come as a man and crush the head of Satan and suffer harm in the process. But this began to pick up speed when God spoke on an individual level.

One man named Simeon knew of the prophecies about a Messiah and had complete confidence that God would fulfill His promises. The Holy Spirit told Simeon that he would not die until he met this Messiah. His entire life began to center around this hope. When he is finally introduced, he is ready to die.

Then God sends the angel Gabriel to a priest named Zechariah, who tells him that he and his wife, both elderly and never able to have children, were going to have a son to prepare the way for the Messiah. Gabriel appears next to a young virgin named Mary and tells her that she is pregnant with the Messiah, and when Mary’s fiancé, Joseph, fears infidelity, Gabriel goes to Joseph and confirms what has happened. Joseph is a direct descendant of King David.

These experiences would be rare enough, but must have been overwhelming in light of the centuries before. These individuals grew up in a time when God had not been heard from for hundreds of years. They knew the scriptures, so you might imagine them asking their parents about the stories contained in them when God moved in clear ways.

“Today I studied when God struck an entire army with blindness because His prophet was surrounded and prayed for deliverance. Have you ever seen God do something like that?”

No, the parents would have to admit.

“What about my grandparents, or great-grandparents? Have they even seen a prophet?”

Perhaps Joseph was told about how he was the rightful heir to David’s throne, but how Judah had not had a king since King Zedekiah was captured by the Babylonians almost 600 years ago, and now the family lived in poverty. There was a promise that a King would again come from their family, but that was said a long time ago in a different era.

To see the full glory of God Himself coming in humility to be a personal God with us, we need to understand the deafening silence that was destroyed by it, never again to return. Seemingly out of nowhere, God begins to move in tangible ways again. The door was blown off the hinges when this long-promised Messiah was born and angels filled the sky proclaiming it (in Bethlehem), scaring the robes off the shepherds who had obviously never experienced it, if they thought it even possible. Thirty years later, the Messiah Himself burnt the house down when He walked into the temple and said He was the fulfillment of prophecy.

The Messiah came and filled four books in the New Testament with the things He said and did. Then He sent the Holy Spirit to inspire twenty-three more and to continue speaking to us to this day. For the record, we’re still pretty rebellious, but that nature hasn’t stopped God from speaking and giving of Himself—giving everything.

The scriptures were very clear about the purpose of God’s dwelling among us. The full meaning of Christmas is found in Good Friday and Easter.

Isaiah prophesied that the Messiah would have the sin of the world placed on Him and be killed as the atoning sacrifice, attaining forgiveness and freedom for those who couldn’t attain it themselves. The psalmist said He would be pierced, thirsty, scorned, and abandoned. The psalms also said He would be delivered to the Gentiles for execution, and those executioners would cast lots for his robe. That Messiah who came to Bethlehem carried a cross to Calvary, facing a brutal physical death, but much worse, facing God’s wrath for the sin of all mankind. 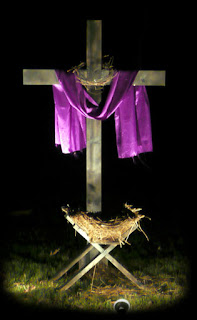 And in that moment, Jesus became the final Passover lamb. He became the bronze serpent lifted up so that others could look on Him and live. All the Old Testament imagery and prophecies found their meaning in Him. And three days later, His resurrection became every bit the miracle His birth was. The journey of securing righteousness and eternal life for mankind had begun when the virgin conceived, and it finished in a miraculous breath.

Up until the period of silence, God had been speaking throughout all of history without taking on human flesh. Jesus’s incarnation was more than just His way to teach us on a personal level. He was born to be a sacrifice. This was not lost on the people involved in the nativity story.

When Simeon prophecies after meeting the Messiah, he says that Jesus is born for the “fall and rising of many in Jerusalem,” will be a sign opposed, and that in the future this birth would cause a sword to pierce Mary’s soul. The prophetess Anna prophesied of His redemption of mankind. Zecheriah prophesied of His salvation. Mary and Joseph were told He would save people from their sin, and Mary in praise acknowledged the prophecy that had come before Him. The magi, when they arrived later, brought Jesus gifts that foreshadowed the crucifixion.

I have at times looked past the nativity, seeing the crucifixion and resurrection as most important. It is true, Jesus coming to Earth in and of itself does not accomplish salvation, and the crucifixion and resurrection accomplish the purpose of it. But let’s not look past the incomprehensible miracle that a God who watched countless cycles of rebellion saw fit, from the very first rebellion, to not just put up with us, but come down to the middle of our mess and walk among us as one of us, without ever giving up His deity. The God of Creation experienced the pain, heartbreak, and day-to-day struggles that we do. The King of Glory came as a helpless baby, and even as a baby was worshipped because some people just got it—He wasn’t ordinary. He was the only one who could do what He did, and He did it. His coming broke a silence we will never experience because what He accomplished while He was here among us made Him our personal God not just for those thirty-some years, but forever. Understanding the buildup to the Christmas miracle and the purpose for which it was done gives it full meaning, and should reignite the wonder of the nativity.

Posted by Joe Trammell at Monday, December 21, 2020 No comments: