"My Body, My Choice"

“My body, my choice.” The mantra of abortion advocates. The rallying cry of Progressives. The end of discussion for feminists. There have been analogies developed to support it. Vitriolic words have been spewed forth to defend it. Who can argue with a woman’s bodily autonomy? 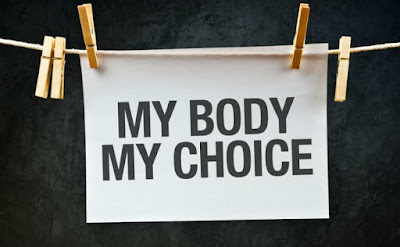 The funny thing is, pro-life advocates do not take issue with this. Indeed, we champion it. A woman should be able to choose what she eats. She should be allowed to choose her own college. Her marriage should be voluntary. We believe just as strongly in a woman’s right to do what she wants with her body.

The small detail that pro-choice people gloss over is that abortion does not only involve a woman’s body. No, there is another’s at stake.

An individual’s rights end where another’s more fundamental rights begin. We have great liberty in this country, but there are limitations. I am not free to cut my friend’s arm off. His rights are protected in that the arm is part of his body, and I cannot simply violate his safety. In a similar way, we do not allow a man to rape a woman. His body cannot be used to compromise the rights of another body.
In other words, there are limits to what we can do with our bodies, most especially if we use them to harm an innocent person’s body.

A fetus is not a part of a woman’s body. Being connected to one’s mother does not make one part of the mother’s body. A woman does not have the right to kill an infant as she is breastfeeding simply because the infant is taking her nutrients from her body. Requiring a lot of care of is not grounds for murder; otherwise, parents of a disabled child would have the right to kill their child at any age.
If a fetus is part of his or her mother’s body, he or she would be a strange growth indeed. The mother has two arms and two legs inside her body. She has two additional eyes and ears. She has an additional DNA type and possibly a different blood type. She may even have male genitalia. All of this would defy nature. But it is perfectly natural because during pregnancy a woman has a distinct human life developing inside her.

Imagine if we followed the bodily autonomy argument to its natural conclusion. A man could morally be able to rape a woman because he has the right to do what he wants with his body, even if it infringes on another’s rights. If this sounds preposterous, the argument that a woman can kill a child because she has the right to do what she wants with her body is equally preposterous.

But there are inconsistencies in Thomson’s argument. The natural result of sex is pregnancy. The natural result of going to bed is not becoming hooked up to a violinist. It should be expected that sex can lead to pregnancy. That is 99% of abortion cases. I will deal with rape and incest momentarily. There is also a distinct difference between unplugging from the violinist and the act of abortion. Abortion is the active killing of a human being. It involves the tearing apart of a fetus. Dismembering her. While an individual’s act of unplugging from the violinist may passively lead to his death, it is not active killing. Imagine if, instead of just unplugging from the violinist, the individual chopped him into pieces with an ax. Simply delivering a child and leaving her to die is not morally superior; while one has no relationship with the violinist, there is a special and unique relationship between the mother and child. 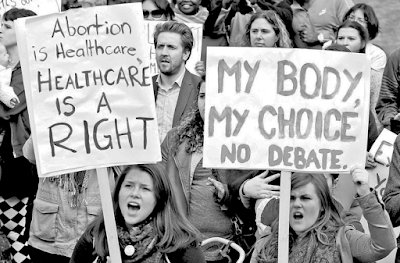 So what about rape? The child’s life should be respected. As embryology has proven beyond doubt that a newly fertilized cell is distinct, whole, living, and human, there is no justification possible for taking her life. Thomson does not argue the humanity of the preborn, simply that a woman’s bodily autonomy is more important than a child’s life.

Take this example: a man’s brother and sister-in-law dropped their son off for the man to take care of. They text him an hour later and say that they’ve run off, and the man is stuck with his nephew. What can the man do? He could raise his nephew himself. He could find parents to adopt his nephew. What he does not have the right to do is chop his nephew into pieces with an ax. No matter how long the adoption process would take, the man would not have a right to kill his nephew. Even in a dire situation that he couldn’t help, he has no right to take the innocent life. If it seems common sense for a born child, it should be no different for a preborn child who is no less human. Read my post on the case of rape for a fuller justification for sparing the life of a child conceived in this horrible circumstance.

The bottom line is, a fetus is unique from his or her mother, and so is not part of the mother’s body. Women should have the freedom to do what they please with their bodies—but only when it doesn’t infringe on another’s more fundamental right to life.
Posted by Joe Trammell at Wednesday, January 24, 2018