No, Hillary, you don't care about children, and you're not fooling us.

Recent events have taught us how unashamedly liberals parade their immorality in front of us. Used to, things like homosexuality, corruption, and adultery were things that people tried to hide. Now it’s flaunted. And if you dare question them, hell will be raised.

The queen bee of Progressives, Hillary Clinton, has championed this newfound super power. After allowing four Americans to die at the Benghazi embassy when she refused to send help, she used private email servers to send 30,000 emails, many of them with classified information, over unsecured networks in hostile countries. Then she deleted the evidence. And yet, after all that, and FBI Director James Comey admitting her wrongdoing, she was let off the hook.

Perhaps no greater gall has been shown by the should-be-felon than in her presidential candidate’s bio. (Yes, in case you’ve been living under a rock, the Democratic Party is about to nominate this crook for president.) Commercials by the campaign quote the bio on her website, which focuses on her championing the protection of children:

“Her mother’s experience inspired Hillary to fight for the needs of children everywhere.”

“After law school, Hillary didn’t join a big law firm in Washington or New York. Instead, she went to work for the Children’s Defense Fund, going door-to-door in New Bedford, Massachusetts, gathering stories about the lack of schooling for children with disabilities. These testimonials contributed to the passage of historic legislation that required the state to provide quality education for students with disabilities.”

“This commitment to public service and fighting for others—especially children and families—has stayed with her throughout her life.”

“After serving as a lawyer for the congressional committee investigating President Nixon, she moved to Arkansas where she taught law and ran legal clinics representing disenfranchised people. She co-founded Arkansas Advocates for Children and Families, one of the state’s first child advocacy groups.”

“She worked with Republicans and Democrats to help create the successful Children's Health Insurance Program, which provides health coverage to more than 8 million children and has helped cut the uninsured rate for children in half.”

“She was a forceful champion for human rights, internet freedom, and rights and opportunities for women and girls, LGBT people, and young people all around the globe.”

The woman (in case you haven’t heard her mention it during every speech, she is a woman) has built her entire identity as a candidate on being an advocate for and protector of children. For the sake of staying on task, I’ll set aside the shaky facts put forth by the Clinton campaign and focus on the utter gall of her hypocrisy.

In 1999, Clinton assured us that being “pro-choice” is not being “pro-abortion” – an unfortunate trap many Christians fall into. Allow me to put forth the definition as found on Google:

Essentially, Clinton has taken the position that preborn lives are “potential lives”, but she wants to keep the question open and unclear, and regardless of that, it’s not only about the life of the preborn child, it’s about other lives, so abortion should be an option: 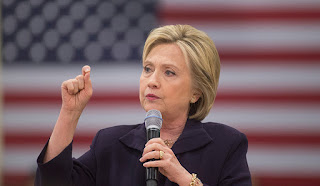 “I believe that the potential for life begins at conception. I am a Methodist, as you know. My church has struggled with this issue. In fact, you can look at the Methodist Book of Discipline and see the contradiction and the challenge of trying to sort that very profound question out.

But for me, it is also not only about a potential life; it is about the other lives involved. And, therefore, I have concluded, after great concern and searching my own mind and heart over many years, that our task should be in this pluralistic, diverse life of ours in this nation that individuals must be entrusted to make this profound decision, because the alternative would be such an intrusion of government authority that it would be very difficult to sustain in our kind of open society. And as some of you’ve heard me discuss before, I think abortion should remain legal, but it needs to be safe and rare.”

So to translate, Clinton is a protector of children, unless they aren’t born, then murdering them is okay as long as it’s safe for the woman that pays to have her child be killed, and it doesn’t happen too frequently. Everything in moderation.

What century are we living in? Preborn life is a settled issue:

These are things we’ve known for a while. They can be found in any embryology textbook. They’re taught in every embryology course. Clinton says “the potential for life begins at conception” as if babies can become alive at a different stage of development. I would claim ignorance on her behalf, but Clinton is not stupid. No, this is a calculated statement to ignore reality.

The preborn are not “potential life”. They are life. Human life. What else could they possibly be? Keeping something intentionally vague to serve political purposes is unabashed evil. Hillary Clinton knows that the people being aborted are young, innocent humans, and she doesn’t care.

But she cares about children. So she says.

But what should we believe? Her biography, or her record? Clinton dances around what one would think to be an important question in the abortion debate – the humanity of the preborn – and says that it would be a mistake for government to intrude into a woman’s life that way. “Well, it could be killing, but woe to the government that stops people from killing children!”

“This decision, which is one of the most fundamental, difficult, and soul-searching decisions a woman and a family can make, is also one in which the government should have no role.” –Clinton, in one particular speech

That’s funny, wasn’t it government that legalized abortion in the first place?

The hypocrisy is blatant, as she claims to be a champion of the rights of children yet doesn’t think the government should interfere with dismembering preborn children. This sort of arbitrary line drawing is how women, or Jews, or blacks were oppressed in the first place. We ignored the fact that they were human to further our own agendas. Clinton is building a successful political career on the broken bodies of human children.

Over time, Clinton has tried to hide her radical views under a moderate façade. She’s said that abortion is a “deeply personal choice”, which should be “rare”, and reduced through adoption. But even liberal media saw through her:

Before her 2008 presidential run, Clinton’s attempt to find common ground with Republicans on abortion was called a “makeover and move to the center that she's now attempting” by the Wall Street Journal.

Could Clinton’s views have shifted over time, or has she at times masked her extreme views to a society she wanted to woo?

On top of this, Clinton is not only supportive of, but insists upon using children to benefit the rest of society: 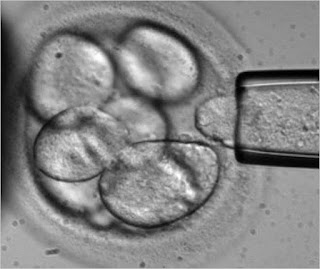 Putting ideology before science. Like ignoring the humanity of the preborn to further one’s political career?

Of course, this is not a ban on all stem cell research. This was a ban on embryonic stem cell research, where tiny human children are created with the express purpose of harvesting their stem cells, killing them in the process. The even more bizarre thing is that there has been success with using adult stem cells, but not embryonic stem cells. But, consistent in her care for children, Clinton wants to ensure the youngest of them can be created to be killed for scientific research which can be done successfully without taking any lives.

During the recent campaign, Planned Parenthood donated $20 million (not bad for a nonprofit) to Hillary Clinton’s campaign to ensure that they have a strong supporter in the White House again. Clinton has said that she “admires” Planned Parenthood founder and racial eugenicist Margaret Sanger. She was “honored” by their endorsement, and the gift from the organization that takes 330,000 preborn lives annually and harvests the body parts of their victims is telling of her views.

In February, Clinton answered claims by Marco Rubio that “she believes that all abortions should be legal, even on the due date of that unborn child,” in an ABC interview: 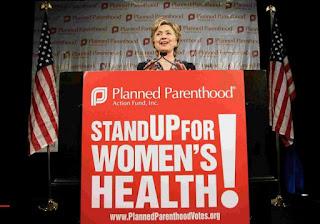 “You know, I’ve been on record for many years about where I stand on abortion, how it should be safe and legal and I have the same position that I’ve had for a very long time.”

Notice anything missing? There’s no mention of “rare”, nor a denial that she supports abortions on the due date of a baby. Both of these contrast “beliefs” she held earlier in her political career.

Now, Clinton being the political whore she is, these views could move towards the center when it suits her in the general election. Regardless, we are dealing with a Progressive that fully supports abortion, in the most radical ways possible. She believes the dismemberment of preborn children should be a right that is protected, supports using young children for scientific research, and receives donations from an organization that profits off of the killing of children.


And she actually expects us to be fooled by the claim that she fights for the needs of children everywhere?
Posted by Joe Trammell at Wednesday, July 13, 2016