Weeding the Garden: Uprooting Sin in Our Lives

A few summers ago, while I was home after my freshman year of college, I spent a pretty good chunk of time weeding. My neighbors needed work done in their flower beds, as did my grandparents. Spending hours doing work alone gave me time to think, and I found good application to the Christian life. 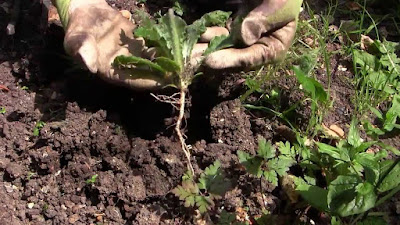 It takes effort to maintain our relationship with God. It’s not light work to truly serve Him. Being human and having a sin nature makes this job difficult. Just as God set Adam in the Garden of Eden to tend it and keep it, so too must we keep and tend our lives.
Weeding a garden can be compared to keeping our lives free of sin. First, as I mentioned, it takes a lot of work. I left with a backache every time. Keeping sin out is a battle. It’s a war. This war is waged in the heavens (“…we wrestle not against flesh and blood…”), but don’t think we can just give it to God and then expect He’ll work through us when we’re unwilling to work too. There’s a reason why we are to take the whole armor of God. And our guard better be up. It will take a daily effort to keep the garden clean.
While weeding, I encountered weeds of all sorts. Sometimes they were small with shallow roots, but they were all over. Other times, I’d find one with roots a foot or two deep in the ground. Sin comes in all sizes in our lives. Sometimes it’s something that just takes minor corrections. Just bend down and pull it out. But those types can be quick to show up again if we aren’t paying attention. Others are a battle. It takes a lot of digging, some planning, and a lot of sweat. The deep-rooted sin in our lives isn’t just some quick job to get rid of. We will have to exert ourselves, move some dirt, and end up tired. We may break a shovel. (I did.) We may need to soften up the ground around it first. Often, the weed won’t come out as is. It has to be cut down before we can go to work on the roots. But unless a thorough job is done, it will return, and it will return bigger than before. Weeding isn’t easy; it’s a lot of work. But it’s necessary if what is good is to survive.
But sometimes, what might appear good can’t survive. On more than one occasion, I found a deep-rooted weed growing among the plant it was choking. They were so intertwined, I couldn’t possibly get the weed out without taking the purposeful plant out as well. There are sometimes things in our lives that aren’t themselves sinful, but they enable other sin to be there. And the good plant and the weed are so wound together that they both have to die to keep the garden clean.
Take a romantic relationship, for example. There’s nothing wrong with mature people being in a relationship. Relationships are eventually necessary if one expects to get married. But there is ample opportunity in relationships to get into sin. Getting too intimate or fighting so that others are pulled in can turn a relationship that would be good into an enabler of sin. If these activities continue, the good plant, the relationship, grows with the weed and allows that sin to continue. And in order to pull the sin out, the relationship must go.
I’m a pretty mellow person, but sports can get me riled up. When I was at Beach Reach, a handful of guys played basketball during free time. I started out playing well, but then I started making mistakes. Knowing that I needed a shower before the evening, I opted to leave early before I started to get mad and take it out on others. There’s nothing wrong with playing basketball, but I had to walk away before it caused me to sin. There are many applications we can make.


Living the Christian life is not an easy thing. It will take hard work to keep ourselves clean. God wants to grow amazing things in our lives, but that won’t happen if we allow sin to choke those things out. Take the time daily to weed the garden, know what needs to be uprooted, then see the fruit that will be produced.
Posted by Joe Trammell at Wednesday, May 03, 2017