Preaching the Gospel to End Abortion: The Fool's Errand

It is a common idea spread among Christians—particularly those that have little to no involvement in the pro-life movement—that we ought not to directly oppose abortion (apart from saying we’re against it), but rather we should just share the gospel and that will produce the same effect. This can be applied to any injustice. The problem is that this view is inconsistent with scripture, inconsistent with historical movements, and inconsistent with logic in light of what the Bible teaches.

We will never end abortion by only sharing the gospel, and it is a fool’s errand to attempt it. Please understand: spreading the gospel is the most important task given to Christians. I do not downplay its importance. And I agree that the gospel does change hearts. Those who are born again will learn from the Bible and the conviction of the Holy Spirit that abortion is wrong. But, I do not believe that our job ends there. Christianity has been the driving force behind positive social change for centuries, and that is rooted in the Bible.

When slavery was ended, there were plenty of people that hated the occasion. The abolitionist president was assassinated in the aftermath. The former Confederacy instituted Jim Crow laws as soon as it could. But, despite not converting masses of people to Christianity (true Christianity that stands against owning other human beings), slavery was ended. Likewise, de jure segregation was ended despite fierce opposition in the Deep South. Most of the racists in the United States were not converted to true Christianity, yet segregation stopped.

This was an acceptable and realistic scenario. Martin Luther King, Jr. remarked, “It may be true that the law cannot make a man love me, but it can keep him from lynching me, and I think that's pretty important.”

Slavery and segregation ended not because the gospel was spread, but because gospel-motivated individuals, and those with similar morals, campaigned specifically against the injustice. King was a minister, and he spread the gospel, but his speeches did not stop at sharing the gospel. The boycotts and passive resistance were not gospel campaigns. They specifically targeted the injustice.

William Wilberforce was a Christian who fought to end the slave trade in England. He stated that our Christianity serves as a means to keep evil in check:

Is it not the great end of religion, and, in particular, the glory of Christianity, to extinguish the malignant passions; to curb the violence, to control the appetites, and to smooth the asperities of man; to make us compassionate and kind, and forgiving one to another; to make us good husbands, good fathers, good friends; and to render us active and useful in the discharge of the relative social and civil duties? 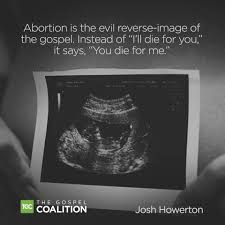 This viewpoint comes from scripture. Paul in II Thessalonians speaks of the restraining ministry of the Holy Spirit:

And you know what is restraining him now so that [the Antichrist] may be revealed in his time. For the mystery of lawlessness is already at work. Only he who now restrains it will do so until he is out of the way. And then the lawless one will be revealed… –II Thessalonians 2:6-8a

“He” speaks of the Holy Spirit. Verse 3 says there must be a “falling away” before the Antichrist is revealed. Paul knows what this means to his readers. The “falling away” occurs only when Christians are taken out of the world. This is why Paul makes the jump that the church knows what is restraining the evil.

Conclusion: One purpose of Christianity is to restrain evil.

The biggest issue with trying to end abortion by only sharing the gospel is that Christians will never be the majority. The majority of a country like the United States might be “culturally Christian,” but not truly.

Jesus tells us that many people go through the gate to destruction, but few find the way that leads to life.

I hope you aren’t holding your breath for us to convert enough people to change public opinion.

If we’re only relying on bringing people to Christ to end an injustice, it will never happen because we won’t come close to converting even the majority, as Christ says. But it is possible, and I have personally seen it over and over, to change people’s minds about abortion while not converting them. The goal should always be to do both, and pro-life public activism offers ample opportunity to share the gospel. But there are plenty of people who are not born again or don’t even identify as Christians who are against abortion.

I don’t particularly care if I sway everyone when it comes to abortion. I care that I sway enough people. Like King said, if we can make the law prevent the injustice, that is sufficient, even if there are a lot of people unhappy about it.

Share the gospel. It is the most important thing we can and must do. But don’t fall prey to the delusion that sharing the gospel is enough to end abortion. Whether you actually care about that is another question. But the method of operation to ending injustice has not been and is not simply sharing the gospel.
Posted by Joe Trammell at Wednesday, May 30, 2018